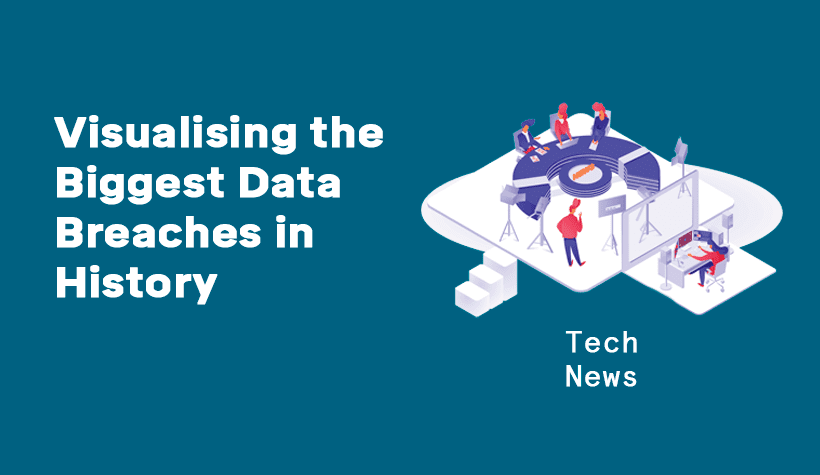 Data breaches are nothing new, yet their effects have lost none of their potency. Indeed, since legislation like GDPR has been introduced, the risk of litigation and legal fallout has added an extra layer of threat to the problem of data insecurity.

From a layman’s perspective, it’s difficult to ascertain the monumental challenge businesses face in preventing data infringement. As cybercriminals have advanced, so too have the measures needed to outmanoeuvre them – with millions now spent each year protecting digital assets.

But just how big an issue is data security in 2021? And which type of businesses are most vulnerable to this unique form of criminality?

Are Data Breaches a Growing Problem?

Since the digital revolution, cybercriminals have sought to steal commercial and personal data. But is the problem getting worse? Or are businesses finding it easier to cope with the challenges of protecting their assets?

Suffice to say that here in 2021, effective data protection remains a game of cat and mouse. As cybercriminals develop new ways to infiltrate security systems, businesses face the relentless task of redeploying and reinvesting in cybersecurity provision – and so the cycle continues.

To give you an idea of the scale of the problem, and whether or not it’s getting worse, here’s a visual showing the number of large data breaches from 2004 to 2020.

As made clear by our chart, a significant amount more data breaches occurred in the 2010s than the 2000s, with 2011, 2013 and 2019 seeing the most large-scale data violations. And there are several scenarios that could explain this, from advances in cybercrime to an increase in the number of businesses moving to digital-only databases.

However, it’s not all bad news, as data from 2015 onwards shows a significant slowdown in the number of large data breaches. Indeed, the five-year change from 2010-2014 compared to 2015-2019 shows just a 7% increase in data theft – suggesting that businesses are turning the tide in the war on cybercrime.

Still, there’s little room for complacency. Data breaches are a serious threat to a business’ continuity, growth and reputation, so a proactive approach to cybersecurity remains critical.

Which Sectors Are Most Vulnerable to Data Crime?

It’s not surprising that some businesses face a greater challenge deflecting cybercrime than others. From company size to the inherent value of certain information, lots of factors contribute to how aggressively cybercriminals pursue particular businesses – but which industries are most at risk from data crime?

Collating cases of data theft for businesses across the industry divide, we’ve put together a chart showing the sectors most vulnerable to cybercrime, including the top ten industries where data breaches are prevalent. 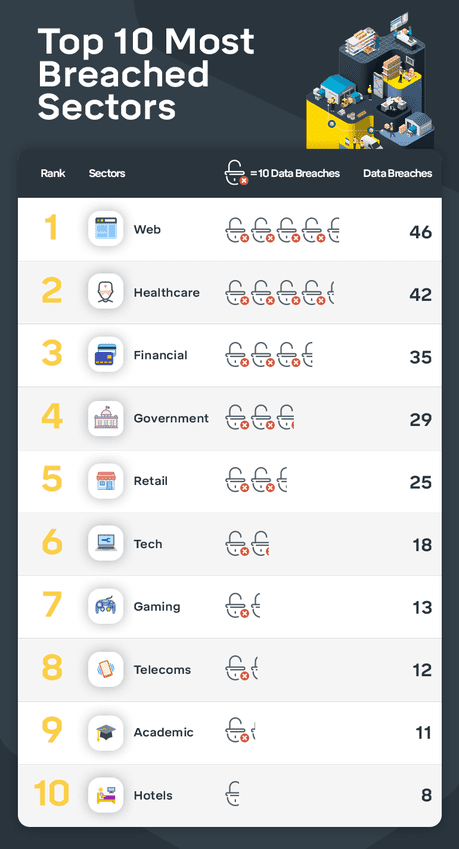 From our research, we established that web companies are the most likely to suffer data breaches, with 46 large-scale violations recorded. This isn’t all that surprising, particularly when you consider the number of users and volume of digital assets such businesses typically accrue.

Similarly, it was no great revelation to see the financial sector in the top three, with 35 major cases of data theft. Such businesses are an attractive and potentially lucrative target, with high-value data emboldening cybercriminals to launch attacks against banks, investment funds and accounting services.

What was startling, however, was the appearance of the healthcare sector in the number two spot, with close to the same number of data breaches as web businesses. This is particularly worrying given the sensitive nature of the information such organisations hold, and raises questions about the digital security provision of public and private healthcare services, like the NHS.

The Top 10 Businesses with the Most Data Breaches

The past decade has seen several high-profile data breaches, prompting many businesses to sure-up their own security assets. But of the businesses to suffer data crime in recent years, which have been the most unfortunate?

Here’s a breakdown of ten businesses that have experienced the most data breaches in recent memory. 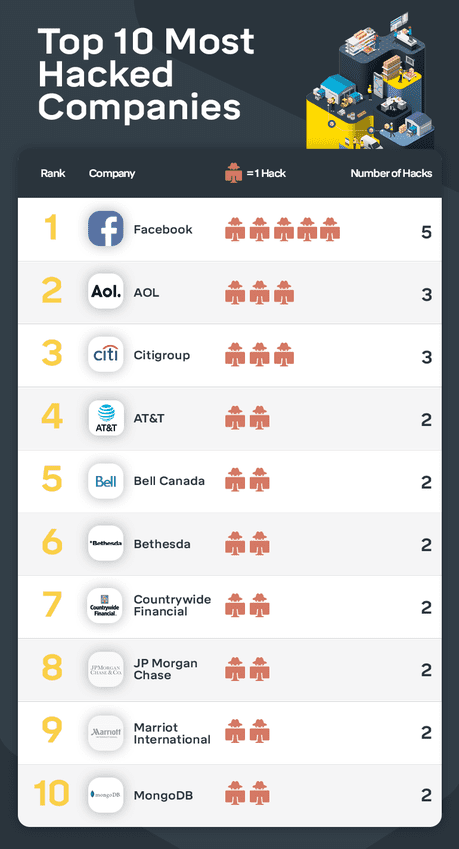 When comparing the most-breached list of businesses to our sector breakdown above, the appearance of firms like Facebook, AOL and Citigroup rings true. Indeed, the top ten is dominated by major global web, tech and financial organisations, supporting the notion that such businesses are the most attractive to cybercriminals.

What Are the Most Common Reasons for Data Breaches?

Another area we thought prudent to include as part of our research was the most prevalent methods criminals use to breach company data. Not only interesting to know, such information can help businesses develop a robust security strategy which accounts for the leading causes of data theft.

Take a look at what we discovered. 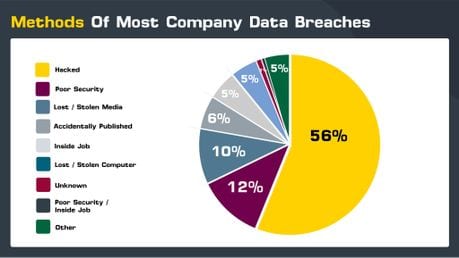 While hacking was the single biggest cause of data theft, it’s the rest of the top five which businesses should pay most attention to. Poor security, accidental data loss and insider theft are all things which a company has direct control over, so it’s clear some businesses need to do more to sure-up their security and invest more resources in data protection.

We hope you’ve enjoyed this in-depth look at data breaches, and that it provides an insightful snapshot of cyber security’s state of play in 2021. At Intact, we provide future-ready business software & ERP solutions which enable you to scale, extend and diversify your operations, all while ensuring optimum safety and security.

Our Intact Managed Services team deploy our solutions via the most secure cloud and on-premises infrastructure platforms, all developed, implemented and managed by our in-house engineer team. For more information or to speak with one of our experienced advisers, visit the homepage or click here to get in touch. 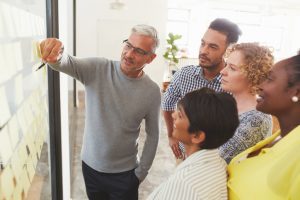 The Benefits of Workflow Charts and How to Get Started 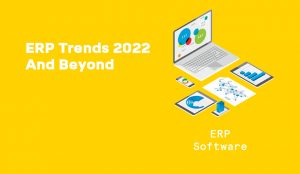