The Best Cities to be a Tradesperson – a UK Study

Across all sectors, the demand for competent tradespeople has seemingly never been higher. But exactly where are the best cities to be a tradesperson in the UK?

That’s what we’ve set out to uncover. Check out our results in full to see which UK cities we ranked as the top places to start a trade in below.

How we found the best cities to be a tradesperson

To pinpoint the best locations for trade, we compiled a list of the UK’s cities, before creating a unique index for different types of tradespersons. This gave us five different indexes in total, encompassing the following trades:

Considering and combining these figures provided us with information on where is best for each type of tradesperson to work.

Note: For the average hourly rate where the city was not available, we went with the closest available place or city. Additionally, Lichfield was excluded from the Plumber index as data was unavailable. The same applies for Lisburn in the Carpenter index.

Top 10 Best UK Cities to be an Electrician 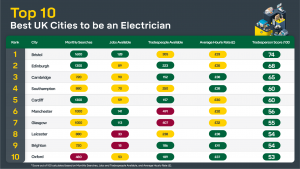 Top 10 Toughest UK Cities to be an Electrician 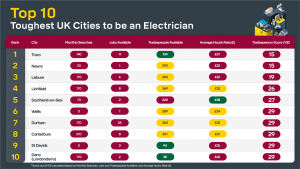 With a total score of 74/100, Bristol is the top city for electricians, offering both the highest demand and the most jobs available than any other place in the country. If you’re looking to spark interest in your business, Bristol could well be your best option.

If money is a major factor for you, then St Albans and Brighton might be your first port of call. Offering an average of £44 p/h and £41 p/h respectively, the two southern cities listed the highest-paying electrician jobs that we came across.

As for jobs, they were most abundant in Manchester, Bristol and Salford, while Bristol, Edinburgh, Cardiff and Liverpool have the highest demand for electricians. If you’re looking to make a name for yourself, however, then Armagh, Derry and Salisbury Birmingham, had the least-saturated markets of the cities we explored.

When it came to the least favoured, Truro, Newry and Lisburn took the bottom three spots, with low demand, very few jobs and poor hourly rates.

Top 10 Best UK Cities to be a Joiner 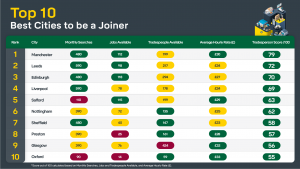 Top 10 Toughest UK Cities to be a Joiner 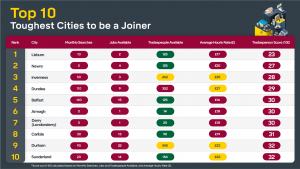 The north put in a great showing for joiners, with four of the five top spots spread across the region. But it was Manchester that came in number one as the best city to be a joiner. Scoring a total of 79/100, the northern powerhouse scored highly on a number of jobs and demand. Leeds and Liverpool also scored highly for search demand.

The best-paid cities for joiners, meanwhile, went to Oxford (£33 p/h), Perth (£33 p/h), Glasgow (£32 p/h) and St Albans (£32 p/h). As for cities with the most joinery jobs available, Edinburgh, Salford and Leeds scored highly, with Edinburgh eking out Manchester’s score of 23 by two.

If it’s less competition you’re looking for as a joiner, Armagh and Derry in Northern Ireland and Truro and Salisbury in southwest England have the least amount of Joiners – great for those who want less competition.

Top 10 Best UK Cities to be a Carpenter 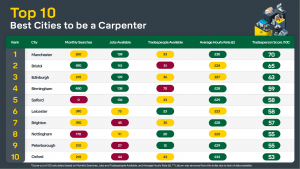 Top 10 Toughest UK Cities to be a Carpenter 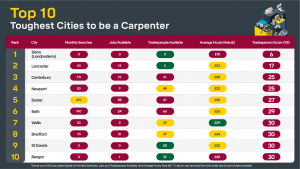 Another strong showing for Manchester, which took the number one spot for carpenters thanks to its high availability of jobs and strong average pay (£30 p/h).

However, you’ll find that the best-paid carpenters across the UK are in Oxford (£33 p/h), Perth (£33 p/h) and Glasgow (£32 p/h). As for the highest demand, Bristol, Birmingham and Brighton scored strongly.

No such problem in Edinburgh, where there were the most carpentry jobs available, while Manchester, Salford and Bristol also had plenty of jobs for the taking too.

With low demand, minimal jobs and fairly poor average pay (especially in Derry’s case), the Northern Irish city, along with Lancaster and Canterbury ranked as the least-favoured cities for carpenters.

Top 10 Best UK Cities to be a Plumber 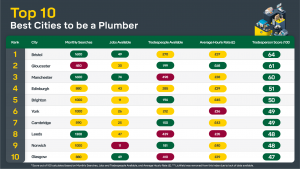 Top 10 Toughest UK Cities to be a Plumber 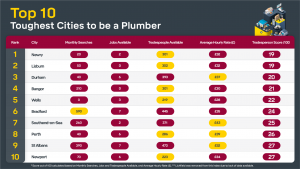 Bristol ranks number one again, this time scoring 64/100 and an impressive 25/25 when it came to demand. Closely behind, Gloucester came in second with 61/100, meaning the top two spots are both held by cities in the South West.

Gloucester is also the best-paid city for plumbers, notching up an average of £68 p/h, £16 more than the £52 p/h that Preston and St. Albans both offer.

Manchester and Salford ranked the highest for volume of job availability. However, they didn’t score well for competition, having a high saturation of the market. The cities with the lowest saturation of working plumbers are Salisbury, Derry and Armagh.

Demand was high in Manchester, with Bristol and Leeds also scoring highly too. The same can’t be said for Newry, Lisburn and Durham, however – all three had the lowest search demand. Along with low average hourly rates, this makes these three cities the least-favourable areas for plumbers in the UK.

Top 10 Best UK Cities to be a Plasterer 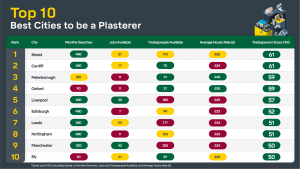 Top 10 Toughest UK Cities to be a Plasterer 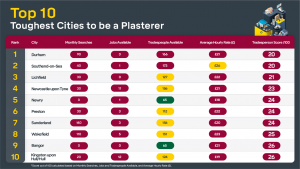 With a final index score of 61/100 Bristol places top once again, sharing the number one spot with Cardiff.

Nevertheless, it was Oxford, Perth and Peterborough that offered the highest pay for plasterers, with £50 p/h, £41 p/h and £40 p/h respectively.

Durham, Southend-on-Sea and Lichfield, meanwhile, are the toughest cities for prospective plasterers.

Our official rankings for the top UK city per each trade is as follows: 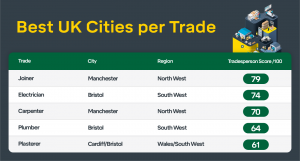 Likewise, the places you may want to avoid can be found below: 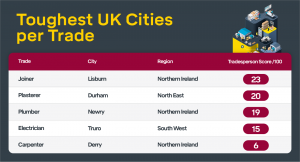 If money matters, then take note of the highest-paying cities on average by trade here: 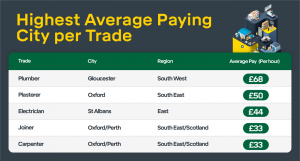 The perfect-fit solution to all your business needs, Intact iQ uses data, stats and insights to optimise your operations whatever sector you’re in. For more information, head over to our dedicated page or get in touch with us today.

How to Build the Right Team for Software Deployments

The Benefits of Digital Transformation for the Wholesale Sector